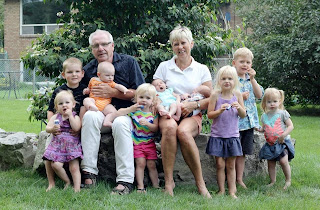 This Sunday, September 1, I will be in Cambridge where I have the privilege of baptizing the youngest of our 9 grandchildren.  Pastor Everett Vanderhorst will be preaching here in Ancaster.
Posted by Pastor Rita at 10:22 No comments:

This week many students will be moving into their dorms at college and university. In Exodus 40: 34-38 we read about another moving-in day. Moses has finished his building project-- the tabernacle.  He places everything in the right spot and carefully arranges all the accessories.  And then it's time to move in:  the glory of the Lord filled the tabernacle.  God is ready to transform our tabernacles, that is, our lives, into something amazing; God is ready to move in. This is the final message of our summer series, spent with the Israelites in the wilderness. Aug 25, 10 am.
Posted by Pastor Rita at 08:07 No comments:

A weekend of big moments!

Stay away from the bull

A harmless calf, or a dangerous bull?  When the Israelites fashioned for themselves a golden calf, they were creating a god based upon their own specifications.  We do the same thing when we allow other things/people/events dictate how we live our lives - we find ourselves bowing to all manner of "little tin gods" (Don Henley).  Take some good advice:  stay away from the bull. Following the wrong god will be fatal.  Sunday, Aug 18, 10 a.m. - our summer series in the wilderness continues.
Posted by Pastor Rita at 09:22 No comments:

Beautiful day for a picnic 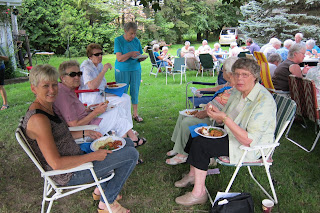 The "North of 60" gang got together for a picnic last week.  Weather was perfect, setting was beautiful, good food and good friends.  Thanks to all who worked to make it happen, and thanks to God for all his gifts to us!  (You can see the rest of the pics in the slideshow located in the sidebar.)
Posted by Pastor Rita at 07:59 No comments:

Bitterness is about so much more than our sense of taste.  There’s something dangerous about bitterness.  It too easily becomes a chronic condition.  Our bitterness needs sweetening, and that happens when our grumbling is met by God’s grace, through a piece of “Good Wood.”  Our 40 years in the wilderness continues next week, as we look at Exodus 15:22-27.  Aug 11, 2013, 10 a.m.
Posted by Pastor Rita at 08:31 No comments:

For 10 days in May we were caught in the grip of the tragedy that had struck the family of Tim and Sharlene Bosma.  On May 6 Tim went missing after accompanying two people on a test drive of the truck he was selling. On May 15 Dellen Millard was charged with his murder.         Three months have passed since those days of desperate prayer, the media blitz that surrounded the family, and the exhaustive investigation of every lead and angle.  People have short memories – there’s always another tragedy to cover, another scandal to report.
While the investigation of Tim’s murder continues, the hard work now happens beyond the public eye.  The same is true for Sharlene and the rest of Tim’s family. During those first weeks, their grief was never a private matter.  Many watched and prayed, they wrote notes and sent gifts. But their lives have gone on much as they did before May 6.  We have short memories.
For Sharlene, and for Tim’s parents and sisters, the memories do not fade. Instead they become sharper.    The pain does not ease; it becomes more intense. Along with the grief come the big questions:  Where was God? Why did he not answer our prayers? Was this part of God’s “plan?” He could have prevented this – why didn’t he?
There are no satisfactory answers to these questions.  We can cite chapter and verse about how God works for the good of those who love him, and how he will never leave us nor forsake us.  As their pastor, I wish I could satisfy the ache in the hearts of those who loved Tim most dearly.
All I know is that we live in a broken world where the effects of sin still wreak havoc in our lives.  Until Christ returns, we will stubbornly hang onto our faith in a God who has triumphed over death.


Sharlene will always remember her husband, and the new charity, Tim’s Tribute, ( http://timstribute.ca/ )will keep his memory alive long after the court case has been concluded, long after the media moves on to other stories. We can live as hopeful people because, while people may forget, our God has a long memory.  No, he will never leave us nor forsake us.
Posted by Pastor Rita at 07:37 No comments: