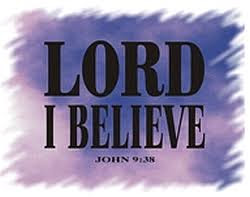 Dear church family,
Many of you have seen the video clip of the basketball player who publicly scoffed at how anyone might be afraid of being at risk of the corona virus.  As he got up from the table, he defiantly rubbed his hands over the microphones and the table surfaces. A few days later, he tested positive for the virus.
I watched a similar story played out on Sunday evening. It was a commercial that aired during the debate between Biden and Sanders.  It was an ad supporting the Freedom From Religion Foundation, in which the narrator, the son of President Ronald Reagan, proudly says that he is an atheist. He concludes the advertisement by saying, “Ron Reagan. Lifelong atheist. Not afraid of burning in hell.”
Reagan, like the basketball player, laughed in the face of something that is much bigger than him.  Of course, Reagan’s endgame will be much more serious than contracting COVID-19.
Today you are encouraged to read John 9.  It’s a moving story of a man who wants to believe in the Son of Man.  “’Who is he, sir?’ the man asked. ‘Tell me so that I may believe in him.’”  We need to approach our Saviour with that kind of humility.  If you’ve been reading through John, then last week you read John 6, where many of Jesus’ disciples fall away. When Jesus asks the 12, “You do not want to leave too, do you?”, Simon Peter answers, “Lord, to whom shall we go?” (v68).
If you are doubting your faith today, remember the words of Simon Peter, and be assured that God has this.  Trust him.
Blessings to all of you,
Pastor Rita